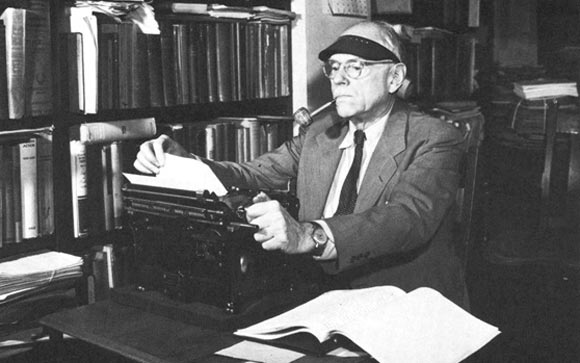 Frank Knight was a prominent American economist of his generation who is known for founding the Chicago school of economics. His outlook on the difference between risk and uncertainty is widely recognized and taught in the field of economics nowadays.

Knight was born on 7th November, 1885, in McLean County, Illinois. He completed his B.A. from the Milligan College in 1911. Two years later, he finished his B.S. and A.M. from Tennessee, after which he decided to pursue a PhD. This inclination took him through Cornell University from where he concluded his education with a PhD in 1916. Knight entered the teaching facet of academics after completing his studies, and was recruited by the University of Chicago in 1927. From thereon he spent most of his academic career at the institution, becoming founder of the Chicago school, up until 1957. During his time at the University, he had the opportunity to teach future Nobel Laureates Milton Friedman, James M. Buchanan and George Stigler.

Knight’s most famous work was his book ‘Risk, Uncertainty and Profit‘, which built on his Ph.D. studies that he submitted at Cornell University. In his book, Knight argued that both ‘risk’ and ‘uncertainty’ entailed situations where the outcomes of the events were unknown. In the case of the former, he argued, the probability of the outcome was known or could be calculated, whereas in the latter’s case the probability distribution was not known. This represented a profit opportunity according to Knight, as he claimed that the accounting for uncertainty gave entrepreneurs the chance to earn higher profits even in the long run equilibrium; an opportunity not afforded by perfect competition.

Frank Knight also made other significant contributions to the field of economics. In 1933, he published ‘The Economic Organization‘. This was a collection of lecture notes in which he described the circular flow model of economies. Knight claimed in his notes that investors would continue to put their money across different avenues, until the returns from all sources would be equalized and brought at par with one another.

Knight also published his article, titled ‘Some Fallacies in the Interpretation of Social Cost’, in which he dismissed Arthur Pigou’s advocacy of government intervention in the case of road taxation. Pigou believed that road taxes were necessary for the government to impose in order to avoid traffic congestion. Knight however countered his assertion, arguing that if privately owned, road owners would likewise charge tolls in order to bring congestion to its optimal or most efficient level. Hence he believed that government intervention in this case served no particular purpose.

In the 1930s, Knight effectively made his last contribution to economics by offering his take on capital theory. He expressed his disagreement with Eugen Von Böhm-Bawerk’s belief that capital could be estimated as a period of production. It is also popularly believed that Knight emerged victorious in the debate over the Austrian perspective of capital.

Frank Knight is recognized not only as a great economist, but a fine social philosopher as well, where most of his works are published. He advocated freedom but was concerned about the prevalence of monopolies and income inequality levels, which could deter its manifestation. Knight had the honor of being named the Morton D. Hall Distinguished Service Professor, Emeritus, of Social Science and Philosophy at the University of Chcago.

Amongst his numerous other accomplishments, Knight was the President of the American Economic Association, an honor he received in 1950. He was also bestowed with the esteemed Francis A. Walker Award in 1957. He passed away in 1972 aged 86.