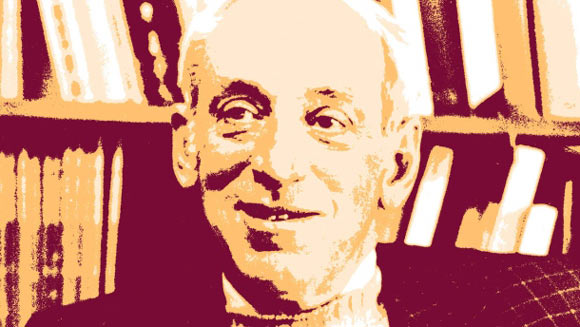 James Tobin is a Nobel Prize winning American economist best known for serving in both the Board of Governors of the Federal Reserve System and the Council of Economic Advisors (the agency that advises the President of the United States). He has taught at both Harvard and Yale before passing away in 2002. His research interests included the study of investment, monetary and fiscal policy and financial markets. His well-known “Tobit Model” is an econometric model for censored endogenous variables.

Tobin was born in March 5, 1918 in Chicago, Illinois to Michael Tobin, a journalist. James took the Harvard entrance exam on the advice of his father and won the entrance scholarship despite any real preparation for the exam. Tobin got his BA from Harvard in economics, his senior year thesis was a critical analysis of Keynes‘ mechanism for introducing equilibrium “involuntary” unemployment. He chose economics as his field of study because “The subject was and is intellectually fascinating and challenging, particularly to someone with taste and talent for theoretical reasoning and quantitative analysis. At the same time it offered the hope, as it still does, that improved understanding could better the lot of mankind.” After his BA he went on to do his MA from Harvard. When World War II began, Tobin joined the US Navy and spent the war on a destroyer. After the War Tobin returned to Harvard and completed his PhD, with a thesis on the consumption function under the supervision of Joseph Schumpeter.

Tobin spent his next three years at Harvard studying and doing research as a part of Harvard’s Society of Fellows. After this, he moved to Yale where Tobin spent the rest of his career. Here, his main research interests were the micro-foundations of Keynesian economics. Tobin remained Sterling Professor at Yale and was President of the Cowles Foundation. He was against monetary policy in general and argued that monetary policy was only effective in one area, namely capital investment. He introduced “Tobin’s q” the ratio of the market value of an asset to its replacement cost. If an asset’s “q” is greater than one, then new investment in similar assets will be profitable. In 1961, Tobin was nominated by John F. Kennedy to the Council of Economic Advisors (CEA). At the CEA, he was instrumental in developing the Keynesian economic policy along with other influential people like Kenneth Arrow, Arthur Okun and Robert Solow. Together they published the Economic Report in 1962, which the media dubbed as the ‘new economics’. The policy they designed was implemented to great success by the Kennedy administration and received much acclaim. Tobin was later appointed to serve as consultant to the US Treasury Department. In his famous article, “Is Growth Obsolete?”, Tobin introduced the Measure of Economic Welfare as the first model for economic sustainability assessment, and economic sustainability measurement.

James Tobin was awarded the John Bates Clark Medal in 1955 and, in 1981, the Nobel Memorial Prize in Economics for his “analysis of financial markets and their relations to expenditure decisions, production, prices and employment”. Throughout his life he was wary of government intervention and frequently pointed out the harmful consequences of government policies, such as the effect of a high minimum wage on the job prospects for inner-city youths. Adair Turner, a member of the UK financial policy committee, supported the imposition of a “Tobin Tax” on worldwide financial services and this made several headlines across the world. Tobin married Elizabeth Fay Ringo in 1946 and they had four children together. Tobin died in 2002 at the age of 84.