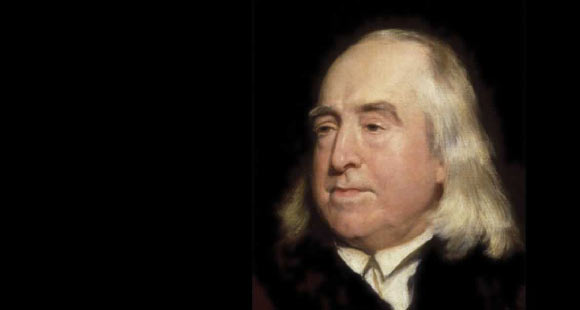 Jeremy Bentham, an English philosopher, economist, theoretical jurist and the key founder of the principal of Utility, was born on February 15, 1748. He hailed from an influential and well off family, his father and grandfather were attorneys. Young Jeremy showed remarkable signs of intelligence, and began studying Latin at the mere age of 4. He was enrolled in the Westminster School at the age of 7, and he acquired a proficiency in Greek and Latin verse writing. Bentham learned several languages including French, Latin and Greek. He also learned to play the violin. In 1760, he began attending the Queen’s college in Oxford, three years later he received his Bachelor of Arts. Upon completing his graduation, Jeremy enrolled in Lincoln’s Inn to pursue a degree in law, like his father. He was appointed to the Queen’s Bench, and he also attended Blackstone’s seminars at Oxford. In 1766, he received his Master’s degree and a year later, began his legal career.

Bentham did not began practicing law, instead, he began formulating a series of changes that in his opinion, were important in order to promote a consistent, humane and simplified legal system. Bentham thought that the practices in court that he had witnessed as a student, were cruel, costly and barbaric. Therefore, rather than advancing his career as a lawyer, much to his father’s despair, Bentham busied himself in research, phial experiments, and pondering over the injustices done by the legal system. Inspired by his friend, Dr. Fordyce, Jeremy Bentham conducted various chemical experiments and began to study the extensive dimensions of chemistry. In 1783, he translated an essay by Bergman on the usefulness of chemistry. Later, he studied physical sciences, moving on to politics and law, which became his area of expertise.

Bentham did not give up his work of drafting proposals for legal and social reforms, his research led him to the development of a design for a prison system. He spent 16 years to construct the perfect model for the building, he named it Panopticon. Bentham believed that his project would earn the Government’s acceptance for a National Penitentiary, and he would be appointed as the contractor-governor. However, his dreams turned sour as the prison was never built, but the concept influenced countless of generations and became a prominent example of the 19th century ‘disciplinary’ institutions.

In 1776, Jeremy Bentham published his first book, ‘A Fragment on Government’, in which he proposed a breakup on the Government as a possible way to improve legal conditions. The book also criticized the English common law and argued that a social contract has a legal basis. In 1789, he published his most successful and highly praised book, ‘An Introduction to the Principles of Morals and Legislation’. This publication marked a turning point in Bentham’s career and added fuel to his success, as through this book, he introduced the principle of utility. In 1800, he collaborated with Patrick Colquhoun on a project to rid London of Corruption. Together, they worked on the Thames Police Bill, which was later named the Thames River Police, the first defensive police force in the country. In 1823, Bentham, along with James Mill, co-founded the Westminster Review for the ‘Philosophical Radicals’ journal.

Apart from politics and law, Bentham has also done considerable works in fields such as economics, animal rights and gender issues. His work on monetary expansion has proved much beneficial in reducing unemployment. He was a strong advocate of women’s rights, and he supported the equality of both genders. He was also a supporter of women joining the legal profession.

Jeremy Bentham has made numerous notable literary and academic contributions. Some of his highly acclaimed books include ‘Introductory View of the Rationale of Evidence’, ‘Rationale of Juridical Evidence’, ‘Defence of Usury’, ‘An Introduction to the Principles of Morals and Legislation’, ‘Panopticon’, ‘A Protest Against Law Taxes’, ‘A Table of the Springs of Action’, ‘On the Liberty of the Press and Public Discussion’, ‘Three Tracts Relative to Spanish and Portugueze Affairs with a Continental Eye to English Ones’, ‘The Elements of the Art of Packing’, ‘Truth versus Ashhurst’, ‘The Rationale of Reward’ and ‘The Rationale of Punishment’, among others.