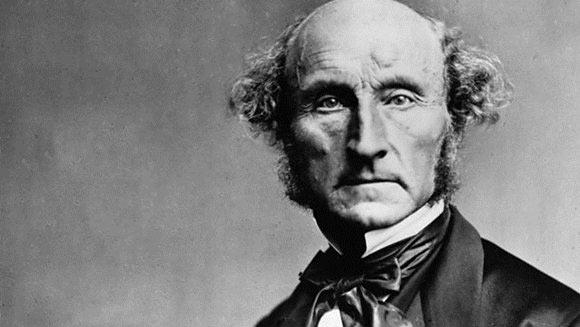 John Stuart Mill was born on May 20, 1806, in Pentonville, London. He was the eldest child of James Mill, a preeminent British, historian, philosopher and economist, and Harriet Burrow. James Mill was a strict disciplinarian and he gave John a very arduous brought up, constantly demanding him to excel at all his academic endeavors. Young John was a very bright and ingenious child, he began learning Greek at the mere age of three. At the age of eight, he began studying Latin, Euclid, and algebra. His father encouraged him to read history, modern and classical philosophies as well as literature, he devoured Aesop’s Fables, Xenophon’s Anabasis and the Herodotus. The 10 year old John began reading Plato and Demosthenes, and he knew the six dialogues of Plato, Lucian, Diogenes Laertius and Isocrates.

At the age of 13, Mill’s father introduced him to Political Economy and Economics, together they studied the works of Adam Smith and David Ricardo, and formed their classical economic view of production. These lessons immensely assisted his father while penning down his book, the Elements of Political Economy, in 1821. At the age of 14, he went to France for a year to stay with Sir Samuel Bentham. He enjoyed the scenic beauty of France, and attended courses on chemistry, zoology and logic in Montpellier. He met several leaders of the Liberal Party and other distinguished people like Henri Saint-Simon. Upon reaching the age of 20, Mill started suffering serious psychological injuries and eventually, had a nervous breakdown. He abandoned his hard regime of education and gave himself up to reading the Mémoires of Jean-François Marmontel and the poetry of William Wordsworth. The pen friendship between Mill and Auguste Comte played an immensely vital role in his psychological revival, as he was greatly influenced by his positive philosophies.

John Stuart Mill began his career by working for the East India Company, along with his father. He worked there till 1858. In 1865, he was appointed as Lord Rector of the University of St. Andrews, he worked there till 1868. During this period, he was also appointed a Member of Parliament for City of Westminster. He voted for the lightening of hardships on Ireland. In 1866, Mill became the first person to show support for Women’s right to vote, openly in parliament. He was also a strong supporter of social reforms such as labor unions and farm cooperatives.

Mill’s career as a philosopher began in 1843, when he published his highly celebrated books, System of Logic, Ratiocinative and Inductive, his most remarkable works. Mill explored the nature and the limitations of power that are imposed on an individual. He developed the theory of Harm Principle, which states that every individual is entitled to act accordingly to his wishes as long as his actions do not bring harm to others. Mill also proposed that people can be manipulated to give a false opinion, if they are engaged in an open discussion, and if they are forced to repeatedly re-asses and re-affirm their views.

In 1948, he authored his most celebrated book, the Principles of Political Economy, which analysed the conditions of production, namely labor and nature. Mill was a great advocate of women rights and gave them great precedence in their work as well. His book, “The Subjection of Women” made him one of the earliest male writers to work in support of feminism. According, to Mill, women were faced with three hindrances, Society and gender construction, education and marriage. He believed that the role of women in marriage must be changed, and oppression of women was a big obstacle in way of the progress of humanity.

In 1961, Mill presented the world with yet another brilliant work “Utilitarianism”, through which he introduced his acclaimed “greatest-happiness principle”. The principle states that one’s actions must always be based on producing greatest happiness for the greatest number of people. He established the idea of qualitative separation of pleasures in utilitarianism, he believed that an individual can derive greater satisfaction from intellectual and moral pleasures as compared to physical pleasures.

In 1858, John Stuart Mill encountered overwhelming grief with the death of his beloved wife Harriet Taylor. In 1865, he was elected to the House of Commons without even running a campaign. He died on May 8, 1873, and was buried next to his wife in Avignon, France.