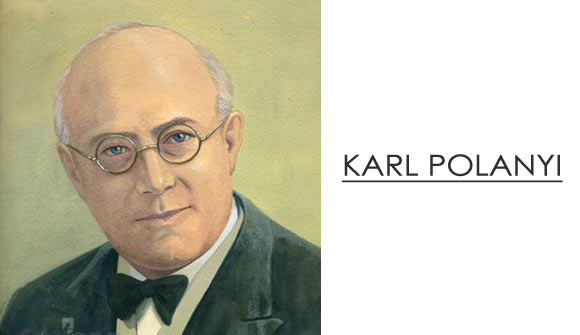 Karl Polyani was born as Károly Pál Pollacsek on October 25, 1886 in Vienna, to parents Mihály Pollacsek, a well-to-do railroad contractor, and Cecile Wohl, a salon owner. He came from a highly educated family which gave the world many intellectual, scholarly and artistic minds.  Karl received his basic education at home and later, he attended the Minta Gymnasium. He attended the University of Budapest, from where he was expelled in 1907 for defending Professor Gyula Pikler who was facing harassment due to his radical socialist ideologies. Polyani received a doctorate of jurisprudence from the University of Kolozsvár in 1909, he received his diploma in 1913 and was admitted to the bar.

In 1908, Karl Polanyi founded a radical party of Jewish students, the Galileo Circle, which was a major source of intellectual, spiritual and political guidance for Hungarians during and after the World War I. Polyani also served as general secretary of the Radical Citizen’s Party of Hungary before serving as a cavalry officer during WWI which left him inflicted with typhus and a serious hernia, he was taken to Vienna to recover his health. There he met Ilona Duczynska, the two married in 1923 and had a daughter, Karoline Helene Polanyi.

During the years 1924-1933, Polyani was a major commentator on world affairs, however, with the sweeping tide of fascism taking over Europe, he had to immigrate to England. There he worked for the Workers Educational Association, Oxford University and the University of London, where he conducted lectures and tutorial classes. Soon, he received the status of an eminent lecturer on International affairs and made several tours to the United States, being a resident scholar at Bennington College. In 1944, he published his first book The Great Transformation in which he discussed the emergence of a market society, the impacts of the war and the social cost of reviving the market society. His book was received with overwhelming approval and his fame for his expertise in the field of economic history spread due to which he began receiving several offers to conduct lectures.

His wife, Duczynska, was barred from the United States because of her former ties with the Communist Party therefore the Polanyi family settled in Toronto, Canada in 1950 while Karl took up the job of a visiting professor at Columbia University teaching economic history. Meanwhile, with the collaboration of other scholars, Polyani conducted ample research on economic history, sociology and anthropology which was published in the form of the Trade and Market in the Early Empires (Polanyi et al. 1957).

Polanyi made extremely productive contributions in the field of economic anthropology and conducted an in depth study of the active slave trade from Africa in his last years, his works were published in 1966 as Dahomey and the Slave Trade. He and his wife also assisted several Canadian poets in preparing an anthology of Hungarian writing from the period 1930 to 1956. He introduced the journal Co-Existence to give birth to discussion which could lead to resolve the problem of peaceful coexistence. The first issue was published on April 23, 1964, following his death.

Karl Polanyi was a major advocate of peace and he made notable efforts in furthering the study of a comparative system of economics and politics that would serve to promote world peace. Although he is criticized for advocating socialist views, Polanyi’s efforts to promote redistribution of income and the formation of a profit maximizing market system which equally benefited all citizens, free trade and the removal of barriers to commerce in order to promote peaceful co-existence among nations, are highly applauded.