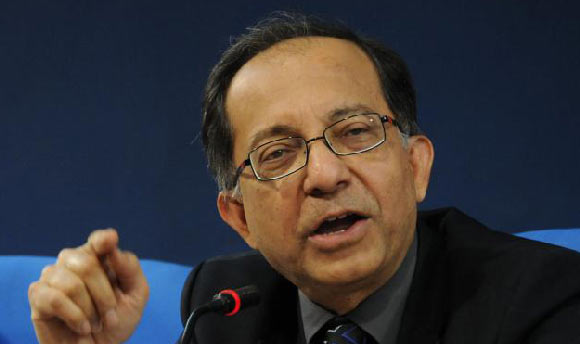 Kaushik Basu, a renowned Indian economist who had the honor to serve as the Chief Economist and Senior Vice-President of the World Bank, was born on January 9, 1953 in Kolkata, India. Basu received his early education at St. Xavier’s Collegiate School in Kolkata. After finishing high school, Basu was caught up between his desire to follow the field of economics and his parent’s wish for him to build a career in Physics. He won the debate with his parents and in 1969, he shifted to Delhi to enroll in an undergraduate programme in Economics (Honors) from St. Stephen’s College. Later, in 1974, he completed MSc in Economics from the London School of Economics. Basu became highly influenced with the logical teachings of Amartya Sen’s work and went on to do a PhD under his tutelage. Moreover, he also received honorary doctorates from Lucknow University in 2011, Assam University in 2012, Fordham University in 2013, and Indian Institute of Technology (IIT)  in 2013.

Currently, he serves as the fourth President of the Human Development and Capabilities Association founded by Amartya Sen. He has had the honour to advise the members of the the World Bank, ILO, the Reserve Bank of India and for several years he remained a valued member of the steering committee of the Expert Group of Development Issues set up by the Swedish Government. He is also a member of the Board of Directors of the Exim Bank of India.

Kaushik Basu is a visiting professor at a number of distinguished universities such as Princeton, London School of Economics, Harvard University, Princeton University, and M.I.T. He has also served on the editorial boards of several economic journals including the Editorial Boards of the Journal of Development Economics, Journal of Economic Perspectives, Japanese Economic Review and the World Bank Economic Review. He remains an editor of Social Choice and Welfare and has made several notable contributions to popular magazines and newspapers such as The New York Times, Scientific American, India Today and Business Standard. Moreover, he used to write a regular column for BBC News Online. He is invited to various television programmes on CNN, NDTV, CNBC and BBC to comment and advise on the economic and political situations all over the world.

Basu has penned several highly acclaimed books on the topics of Industrial Organization, Development Economics,  Welfare Economics and Game Theory. His books include Of People, Of Places: Sketches from an Economist’s Notebook (1994, Oxford University Press), Analytical Development Economics (1997, MIT Press), Prelude to Political Economy: A Study of the Social and Political Foundations of Economics (2000, Oxford University Press) and his latest work Beyond the Invisible Hand: Groundwork for a New Economics is to be published shortly by Princeton University Press and Penguin.

In May 2008, the Indian government awarded him with the honor of India’s highest civilian awards, the Padma Bhushan. Kaushik Basu is a strong advocate of integrating the priceless qualities of honesty, good morals, trustworthiness and integrity with the mechanics of running a prosperous economy.