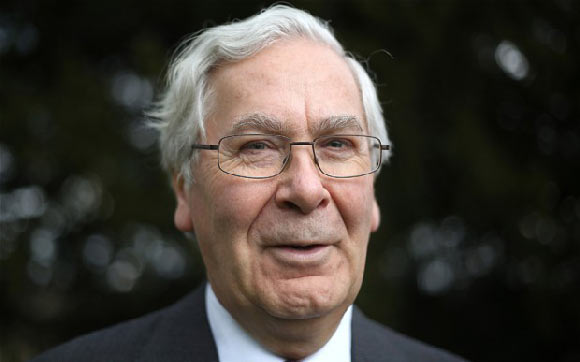 Mervyn Allister King is a famous economist and banker perhaps best known as Governor of the Bank of England. He remained in office for ten years (2003-2013) and recently relinquished his post to the Canadian Mark Carney. While holding Governorship of the Bank of England he was also Chairman of its Monetary Policy Committee (MPC). King is a Fellow of the British Academy, and holds honorary degrees from various universities including Cambridge, London School of Economics and Helsinki University. Mervyn King was knighted in 2011 (GBE) and was appointed a Life Peer in 2013 by Queen Elizabeth II for “contributions to public service”. He is a member of the House of Lords as a crossbencher and has the title of ‘Baron King of Lothbury’.

Mervyn King was born on March 30, 1948, he is son of a railway porter and attended his local grammar school before being offered a place at Kings College, Cambridge, where he received a bachelor’s degree (first-class) in economics. He later studied at Harvard as Kennedy Scholar. Upon graduation, King worked as a researcher at Cambridge, working with notable people like Nobel Prize winner Richard Stone. He later taught at the University of Birmingham and was part of the visiting faculties at both Harvard and MIT. During his time as visiting faculty, he interacted with renowned individuals like Ben Bernanke, Chairman of the US Fed. After teaching in the US, King became Professor of Economics at the London School of Economics where he founded the Financial Markets Group.

After his successful teaching career, Mervyn King joined the Bank of England as Chief Economist and Executive Director. He soon after became Deputy Governor and a part of the Group of Thirty, an international body of thirty leading bankers, financiers and economists. King succeeded Sir Edward George as Governor of the Bank of England in 2003. Here he made many influential decisions especially those related to the Financial Crisis. First of all, King was part of the Bank of England when the Monetary Policy Committee was formed in 1997 and the Bank was given complete freedom to manipulate UK interest rates. Thus, he attended all MPC meetings till his retirement in 2013. King was in office when the Financial Crisis of the late 2000s occurred and he was blamed by some for not helping enough with controlling the ‘Real Estate Bubble’ that was forming in England when houses were overpriced by up to 40%. After the Financial Crisis had occurred, King had a different approach while dealing with it; while the Federal Reserve, the European Central Bank and other central banks worldwide tried to alleviate the crisis by injecting large amounts of money into the economy King refused to do so saying he had warned banks in the past that they were accumulating too many bad risks and the Bank of England would not be obligated to bail them out. King eventually slashed interest rates from 5% to 0.5% to help deal with the crisis, this helped as the financial meltdown eventually stemmed.

To commend his dealing with the Financial Crisis and other services, the Governor of the Bank of England received not just a knighthood in 2011, but the highest form of that award, the Knight Grand Cross (GBE). Some people agree while others disagree with the actions King took before and after the onslaught of the Financial Crisis, yet no one can disagree on the fact that he has had an interesting career and a keen banking sense.