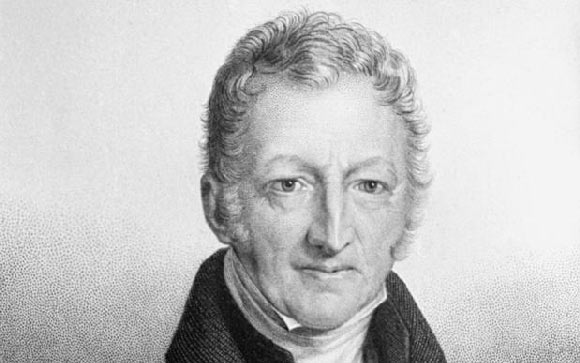 Thomas Robert Malthus, an English Economist and demographer celebrated for his pioneering theories on population, was born on February 13, 1766 to parents Daniel and Henrietta Malthus, near Guildford, Surrey. Thomas was born in to a prosperous family. His father, Daniel Malthus, was a rather unconventional man, deeply interested in philosophy, mainly due to his friendship with skeptic and philosopher David Hume and his regard for the teachings of the liberal philosopher Jean-Jacques Rousseau.  His father had very liberal ideas about Thomas’s upbringing, he was home schooled until he was admitted to the Jesus College, Cambridge in 1784. Thomas showed excellent academic performance, he studied a diverse range of courses and won prizes in Greek and Latin. After graduating in 1788, Malthus was admitted to the Cambridge University, where he earned a master’s degree in arts, in 1791. He was elected as a fellow of Jesus College, Cambridge in 1793. He took his holy orders in 1797.

In 1796, Malthus wrote a pamphlet, “The Crisis”, in which he supported the recent proposition of Poor Laws that recommended providing housing to the homeless and poor. Malthus began his career in 1805, he took up the post of the professor of history and political economy at the East India Company’s college in Haileybury, Hertfordshire, becoming the first individual to hold such an academic office. In 1819, Malthus was elected as Fellow of the Royal Society, and later in 1821, he was admitted as a member of the Political Economy Club, which boasted the membership of intellectuals such as David Ricardo and James Mill. In 1824, he was elected as one of the 10 Royal Associates of the Royal Society of Literature. In 1834, Malthus was among the founding members of the Statistical Society of London.

Thomas Malthus made countless literary contributions to the field of economics. His most notable work ‘An Essay on the Principle of Population’ was published in 1978. The most well-known of his works include ‘An Inquiry into the Nature and Progress of Rent’ published in 1815 and ‘Principles of Political Economy’ published in 1820. Malthus was the pioneering economist who gave way to the introduction of the commonly known field of thought of Malthusianism, where he argues over his theory that population growth will inevitably lead to the scarcity of food supply, therefore, the improvement of living standards is impossible if reproduction is not limited. He argued that the expansion of populations leads to the insufficiency of lands to grow crops. Malthus received criticism as well as applause for his analysis of population growth, the Malthusian theory of population made a strong impact on the British social policy and influenced intellectuals such as Darwin, who constructed his theory of natural selection after being moved by Malthus’ work. His theory, however, had its shortcomings as he failed to predict the Agriculture revolution and the advent of contraceptives which decreased the fertility rate considerably.

Malthus theory of population was put aside for a while only to become popular again in the 20th century, when the advent of Keynesian economics, threw more light on the analysis provided by Malthus. Thomas Malthus died on December 23, 1834, near Bath, Somerset, England.